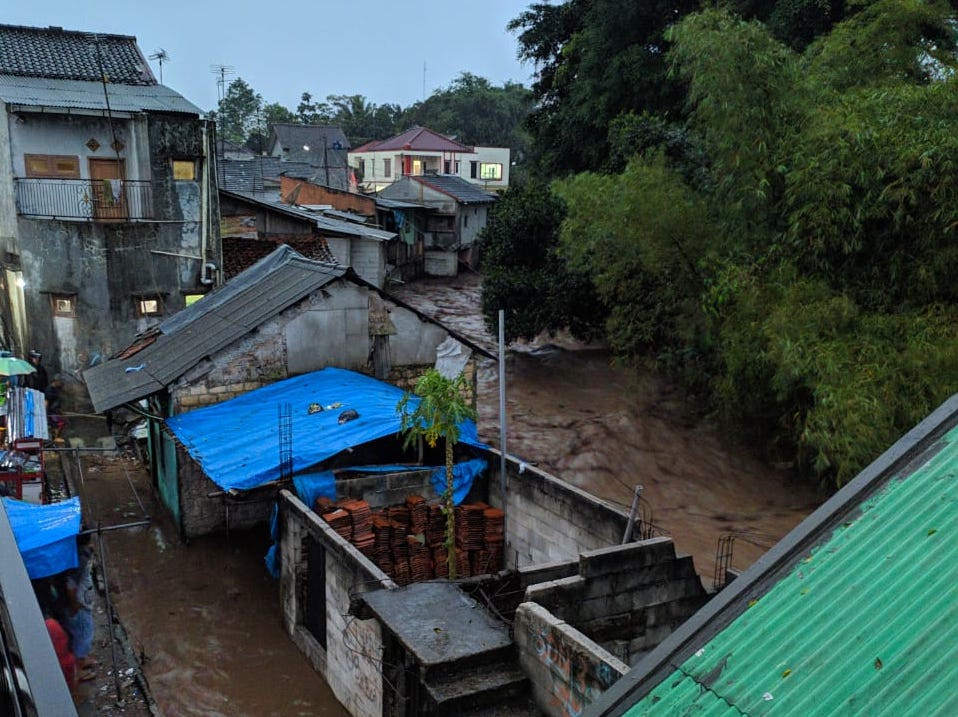 Houses in Sukabumi, West Java, are inundated by flood water on Monday after torrential downpour caused nearby rivers to overflow. (Courtesy of BNPB/--)

National COVID-19 task force spokesperson Wiku Adisasmito has warned the public about possible infection clusters at shelters for flood victims as the rainy season approaches. “We are calling on regional governments to be vigilant to minimize the risk of COVID-19 transmission. One potential source of COVID-19 clusters would be flood victims’ shelters,” Wiku said on Thursday.

Adherence to health protocols at the shelters, including wearing masks, physical distancing and washing hands, could reduce the risk of transmission, he said. He also noted the importance of maintaining the cleanliness of the shelters and providing sufficient air circulation and sunlight to protect the people from common rainy season diseases such as dengue fever, diarrhea, leprosy, typhus and skin disease.

“All of these diseases could lower people’s immunity, causing them to become more susceptible to contracting COVID-19,” he said.

The Meteorology, Climatology and Geophysics Agency (BMKG) has predicted the rainy season – which often brings floods – will begin in late October or early November this year, but several regions have already reported torrential rain during the current transition from the dry season to the wet season.

Febri Diansyah, the head of the Corruption Eradication Commission’s (KPK) public relations bureau, has revealed his decision to resign from the antigraft body.

“I’ve tried [to adjust] to the new situation in the KPK, to serve as the head of the body’s public relations bureau. However, I feel like opportunities [for KPK employees] to make a contribution have declined,” said Febri.

Previously, Febri served as the KPK’s spokesperson, before he was posted to the agency’s public relations bureau after the KPK appointed its new chairman, Firli Bahuri. Febri was among those who strongly opposed the contentious revision of the KPK Law back in September 2019 since the revision was deemed detrimental to the KPK’s independence.

“The effectiveness of anticorruption measures and the KPK’s performance depends on [the KPK’s] independence. Currently, [the KPK] is no longer an independent agency. We don’t know for sure what the future will be for the KPK,” said Febri.

The National Committee of Agrarian Reform (KNPA) has reported that at least 49 protesters who attended Farmer’s Day rallies on Thursday in several locations were detained by the police. In a written statement, the KNPA said the 49 detainees consisted of university students and activists from a number of regions, including Makassar, South Sulawesi; Surakarta, Central Java; Bengkulu city, Bengkulu; Kupang, East Nusa Tenggara; and Manado, North Sulawesi.

The KNPA described the detention of the protesters as a form of repression against democracy and free speech. The organization urged President Joko “Jokowi” Widodo and National Police chief Gen. Idham Azis to immediately release the protesters.

Coordinating Economic Minister Airlangga Hartarto predicts the Indonesian economy to contract between 0.6 to 1.7 percent this year. “And in the third quarter – one more week – [the economy is] predicted to shrink by 1 to 3 percent,” Airlangga said during a coordination meeting with the National Economic Recovery and COVID-19 Mitigation Committee in Bintan, Riau Islands. But, Airlangga remains optimistic with the prospect of economic recovery in 2021 by reiterating the government growth target in the range of 4.5 to 5.5 percent. “It depends on vaccine availability, 270 million vaccines as planned by the government,” Airlangga explained.

Publicly listed property developer PT Modernland Realty is negotiating a debt restructuring scheme for its US dollar denominated bonds amounting US$390 million. Moderland president director William Honoris held a video conference with bondholders to discuss the restructuring scheme this morning at 10.30 PM Singapore time, accompanied the company’s financial consultant Borelli Walsh and legal consultant Milbank LLP. Previously, credit rating agency Fitch Ratings downgraded Modernland’s rating, as well as the rating of its two dollar denominated bonds from CC to C. One bond is worth $150 million with due date in 2021. Another is due in 2024 and worth $240 million.

According to the latest renewable bill draft, the government is going to provide subsidy for renewable energy tariffs. The subsidy is regulated in Article 47 of the bill draft, which is written as ‘if electricity tariffs from renewable energy-based power plants is higher than the PLN’s electricity supply cost, the government shall pay for the difference between the tariffs and the supply cost to PLN’. In support of the article, Halim Kalla, the Indonesian Chamber of Commerce and Industry deputy chairman for renewable energy, said, “Hopefully, subsidy provision could improve the economic value of [renewable] projects.” Indonesian Renewable Energy Society (METI) chairman Surya Dharma also support the article, saying it provides certainty for investment in renewable energy projects.