Teachers fret over virus with schools set to reopen 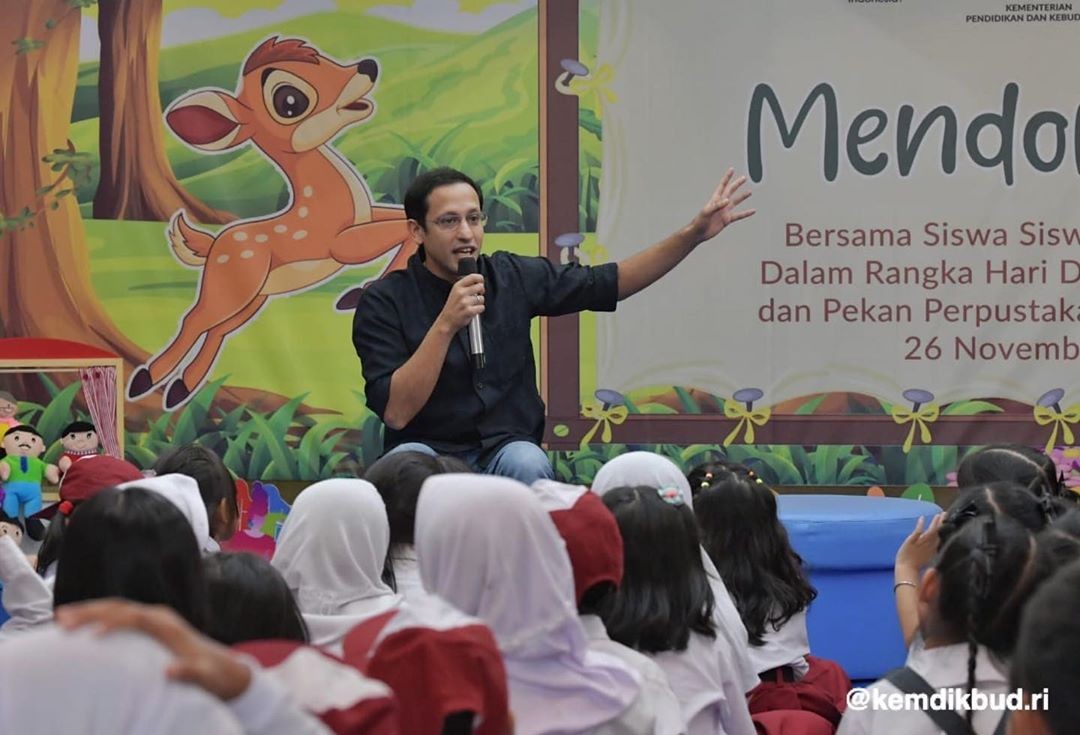 Teachers fret over virus with schools set to reopen
The Jakarta Post, Headline

The Education and Culture Ministry’s decision to allow a gradual reopening of schools located in COVID-19 low-risk areas, or “green zones” beginning in July have sparked concerns among teachers and parents alike.

Nadiem said he would hand over the final say to reopen schools in green zone areas to their respective regional administrations, but added that schools must still fulfill strict requirements and health protocols before they can reopen. All students are also still required to wear masks and practice physical distancing.

Despite the gradual easing of restrictions, people who live outside the designated green zones are worried that the government might be making a big mistake, particularly since the number of COVID-19 infections was still high in many areas across the country.

Teachers have also raised concerns. More than half of all school administrators across the country said they were not ready to resume face-to-face learning or usher in the so-called “new normal” period, mostly due to a lack of infrastructure and funding, a recent survey by the Federation of Indonesian Teachers Associations (FSGI) revealed.

Health experts have also weighed in on the situation, concerned that the government’s decisions may have wider implications than can be predicted. Dicky Budiman, an epidemiologist from Griffith University in Australia, urged the government to delay learning activities at school until the end of 2020. The current zoning system and the data provided were “relatively unreliable”, he said, owing mostly to limited testing capacity preventing any real-time observation.

As the 2020 regional elections slated for December draw closer, the government and election organizers are scrambling to allocate funds for the elections. An additional budget for medical kit procurement, among others, is reportedly needed as the upcoming regional elections will implement strict health protocols to avoid COVID-19 transmission.

Budgetary problems have also been further exacerbated by regional administrations’ decreasing financial capacity amid the pandemic as the administration has mostly used their regional budgets for COVID-19 measures.

According to the agreement, the first installment of the additional budget amounting to Rp 1.02 trillion should become available in June, yet to date it has yet to materialize.

During a virtual discussion forum held on Wednesday, election watchdog Association for Elections and Democracy (Perludem) executive director Titi Anggraini questioned the stance of the KPU, which had been “held hostage” by other government institutions in making preparations for the upcoming regional elections. Indeed, previously the KPU had to make a concession as well when its proposal to postpone the 2020 regional elections to March or September 2021 was rejected.

However, KPU commissioner Ilham Saputra dismissed the allegation of the KPU losing its independence. Yet, Ilham admitted that the KPU was still waiting for the additional budget, which would be crucial for the elections’ preliminary stage, such as factual verification of individual candidates to be held on June 24.

Opposition to the Pancasila ideology guidelines (HIP) bill are mounting in the House of Representatives. During the House’s plenary meeting on Thursday, many proposed that the controversial bill should be scrapped altogether.

Among those who opposed the bill was Aboe Bakar Alhabsyi of the Prosperous Justice Party (PKS). Aboe urged the House to immediately announce the cancellation of the bill’s deliberation as the government had recently done. According to Aboe, the House should follow the government’s stance in this regard and also heed the people who had voiced their concerns over the bill’s potential to degrade Pancasila. Aboe further added that by cancelling the bill’s deliberation altogether, the House could focus on more important issues such as COVID-19 policies.

Responding to Aboe was Aria Bima of the Indonesian Democratic Party of Struggle (PDI-P), the party that also proposed the bill. Aria criticized Aboe and other lawmakers who suddenly rejected the bill despite the House’s initial agreement during its meeting on May 12 to deliberate the bill.

While party factions in the House are still squabbling over the contentious bill, the People’s Consultative Assembly (MPR) has agreed that the bill’s deliberation should be postponed. MPR Speaker Bambang Soesatyo urged the House and the government to introduce the bill to the public and receive their input during the postponement.

The Jakarta Police have recorded an increase in illegal drug transactions amid the COVID-19 pandemic, as affirmed by Jakarta Police chief Insp. Gen. Nana Sudjana. The sharp increase was the most apparent in April, with the police recording a staggering increase of almost 120 percent in that month.

According to Nana, illegal drug sellers have attempted to take advantage of the pandemic to increase their profits, assuming that the police were concentrating on enforcing COVID-19 measures.

Nana said the most popular types of drugs sold amid the pandemic were marijuana, methamphetamines and gorilla tobacco. The means of transactions have changed as well. While before the pandemic illegal drug transactions often occurred face-to-face in bars and nightclubs, now the transactions mostly involve small online retailers.

Jakarta Police spokesman Sr. Comr. Yusri Yunus said a considerable number of online drug transactions took place on social media platforms or even e-commerce sites. Online sellers and buyers of illicit drugs, according to Yusri, often form a closed online community in which prospective buyers can communicate with the sellers through chat applications such as Line.

Pollsters and experts say that Indonesians are growing more permissive toward petty corruption and fear that this attitude could serve as motivation for committing an act of major corruption. The trend is reflected in the latest corruption perception index from Statistics Indonesia (BPS), an annual index that describes Indonesians' level of tolerance toward practices that could lead to petty corruption.

“Not to mention that more respondents also said it was 'normal' to pay extra money to police and public officials or middlemen to expedite the process for obtaining a driver's license, vehicle registration certificate, [personal] identity card or family identity card,” Suhariyanto said on Monday.

Bank Indonesia trimmed the seven-day reverse repurchase rate by 25 basis points (bps) to 4.25 percent. This is the third cut this year in a bid to boost economic activities impacted by the COVID-19 pandemic. Meanwhile, the central bank has maintained the deposit facility at 3.5 percent and lending facility at 5 percent.

Governor Perry Warjiyo said the cuts were in line with its aim to revive the economy and projected that the economy should grow between 0.9 and 1.9 percent this year, higher than the government’s projection of - 0.4 percent to 1 percent.

Perry said the central bank’s more optimistic projection on the economy was based on the various fiscal and non-fiscal incentives prepared by the government, the central bank and the Financial Services Authority (OJK) to boost spending, investment, exports and production.

Meanwhile, Finance Minister Sri Mulyani Indrawati said the various stimulus packages would have positive impacts on the third and fourth quarters of 2020, and therefore, the economy would not worsen further this year and should stay in positive territory.

However, businesspeople see the situation differently as the execution and implementation of the government’s various stimulus have been very slow. Also, according to Indonesian Employers Association (Apindo) chairman Hariyadi B. Sukamdani, businesses badly need working capital to jumpstart their activities. And yet, the government has been slow in supporting businesses.

Hariyadi also called on the OJK to encourage banks to lower their lending rates, in accordance with the central bank’s decreasing benchmark rate. Otherwise, it will have no impact on the real sector.

Through the acquisition, Taspen Life controls 70 percent of Jiwasraya Putra, while BTN owns the remaining 30 percent. Taspen president director Antonious Steve confirmed the transaction but refused to reveal its value. Rumors have it that the value of Jiwasraya Putra was around Rp 3 trillion (US$200 million) but it was offered with a premium.

Taspen Life, with total assets of Rp 4.5 trillion as of the end of 2019, booked Rp 60.7 billion in profits last year. Antonious Steve said the transaction does not affect Taspen’s liquidity as the company has Rp 250 trillion under its management. He also said the transaction was in line with regulations.

Asuransi Jiwasraya has defaulted on its payment to JS Plan policy holders after it lost trillions of rupiah due to corruption by its previous management in collusion with capital market players. According to the Supreme Audit Agency, the total losses from the corruption amount to Rp 16.8 trillion. The Attorney General’s Office is prosecuting Jiwasraya corruption suspects.

Fintech company Infovesta Utama director Parto Kawito noted that there were 1,935 mutual fund products at the end of 2019 but then the number decreased to 1,873 products as of May because some products had been liquidated and some protected mutual funds were due. Responding to the trend, he suggested that investment managers be more investor-oriented to regain their trust.

Indonesian Association of Mutual Funds Managers (APRDI) executive Ari Adil noticed that Indonesian investors still preferred mutual funds due to their simplicity and affordability. He also reminded investment managers to maintain their professionalism by adhering to codes of conduct and educate investors so they had a better understanding of mutual fund products.

According to the Financial Services Authority (OJK), net asset value (NAV) of mutual funds decreased remarkably by Rp 65.92 trillion (US$4.68 billion) from Rp 542.20 trillion at the end of 2019 to Rp 476.28 trillion at the end of May 2020. Furthermore, the number of mutual fund investment units also decreased by 19.08 billion units from 424.79 billion units in the same period.

Manpower Minister Ida Fauziyah said 1.7 million people had lost their jobs during the COVID-19 pandemic and the figure could increase to between 2.9 and 5.2 million this year.

“We are trying to reduce open unemployment to below two digits,” Minister Ida said. According to Statistics Indonesia, the number of unemployed people reached 6.88 million people per February this year, or 4.99 percent of the workforce of 137.9 million people.

Center of Reforms on Economics (Core) Indonesia projected that open unemployment would reach its peak in the second quarter, increasing by between 8.2 and 11.47 percent.

The Asian Development Bank (ADB) said in its latest report that Indonesian economic growth would fall to 1 percent this year, and this would cause unemployment to rise, especially among the vulnerable groups of lower-income people.

The Indonesian economy, Wicklein said, should recover next year and grow 5.3 percent, in line with global economic recovery. When the economy recovers, it can expect unemployment to also drop.

Tantri Desyanti, a 25-year-old customer of Jenius, a digital banking platform operated by publicly listed lender BTPN, recently experienced a cybersecurity breach. In a viral tweet posted on June 9, Tantri said she had lost Rp 3.2 million (US$228.58) from her Jenius account, through a series of unauthorized transactions through Paypal.

She was later refunded by the bank, but her case has highlighted the risk of cybersecurity breaches in online banking platforms. BTPN has said it has implemented a multilayered security system to secure digital transactions and is using the latest technology.

Regarding Tantri’s case, BTPN digital banking head Irwan S. Tisnabudi said the bank maintained that there had not been any account breach or issue within Jenius’ internal system. The bank suspected that the customer had been manipulated by a scammer into providing confidential information.

Bank Central Asia (BCA), the country’s biggest privately-owned bank, said it had maintained the security of consumer transaction information and had applied security systems in accordance with regulations.

Publicly listed lender Bank Mandiri has said it has taken measures to secure its mobile application, its identity authentication and its transaction authorization. The bank has a biometric test to authorize access to its Mandiri Online application.

According to a 2018 PricewaterhouseCoopers survey polling 43 Indonesian banks, the industry considers cybersecurity its biggest risk over the next two to three years.