Uncontrolled mobility ahead of Idul Fitri 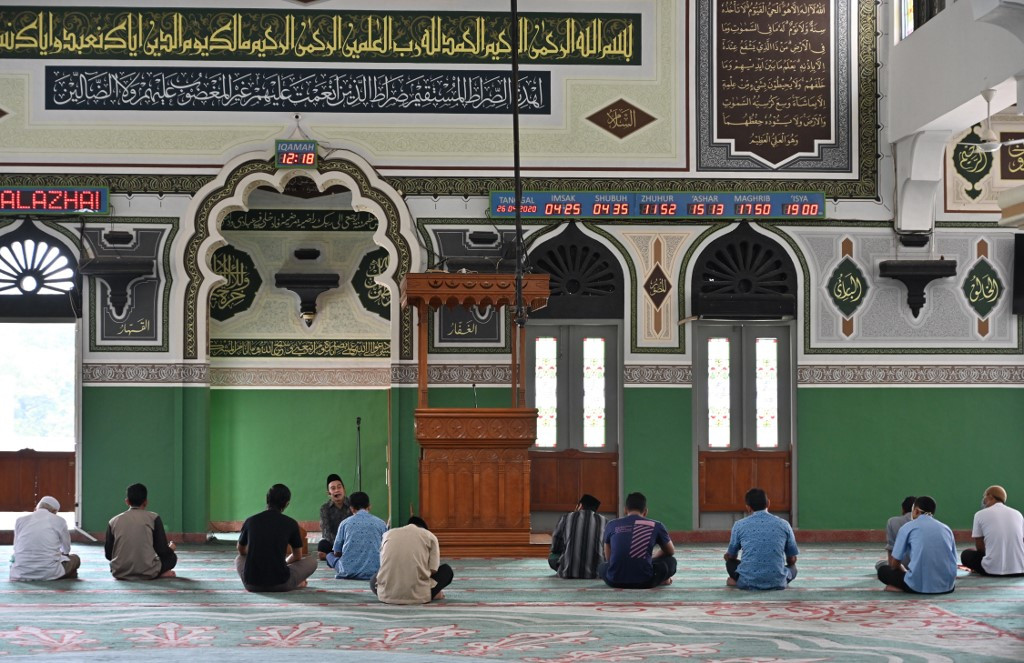 Muslims listen to a sermon after performing noon prayers at Al Azhar mosque on the third day of Ramadan, April 26, in Jakarta. (AFP/ADEK BERRY)

In conjunction with Eid al-Fitr celebration, Bisnis Indonesia, Investor Daily, Kontan, Republika and Koran Tempo were not published on May 22.

The mobility of citizens ahead of Idul Fitri celebrations has appeared to be spiralling out of control as a surge of people have been travelling to and around Indonesia. Swift and decisive steps are deemed needed to address the situation, which could potentially trigger a second wave of COVID-19 infections in the country.

Increased mobility can be observed on the Cikopo-Palimanan toll road. Toll road operator PT Astra International operation director Agung Prasetyo said that around 25,000 vehicles passed through the toll road between Wednesday and Thursday. “This number has increased by around 3,000 vehicles compared to the previous day,” Agung said.

Moreover, a total of 293 migrant workers who were deported from Malaysia yesterday arrived in Batam, Riau Islands.

COVID-19 task force chief Doni Monardo has called on law enforcers to take stringent action against parties who violate the large-scale social restrictions (PSBB) policy. “The PSBB is still valid but there are still many people who fail to comply. It is our duty to guarantee that there will be no second wave [of the virus],” Doni said.

Patients are overwhelming health-care facilities in East Java, where the scale of the COVID-19 outbreak is second only to Jakarta in the country.

On Thursday, East Java saw a record spike of 502 cases, bringing the case total to 2,998, with 241 deaths and 403 recoveries. Half of the cases were reported in the provincial capital of Surabaya, Indonesia’s second-largest city and a thriving trade hub.

The raise marked the highest daily spike ever recorded by a province nationwide, even surpassing that of Jakarta.

East Java has recorded 5,274 patients under surveillance (PDPs) and 23,151 people under observation (ODPs) — those who are suspected of having contracted the virus but have not yet been tested or are waiting for test results — with 601 fatalities among these two groups.

Yet the provincial administration has imposed large-scale social restrictions (PSBB) only in Surabaya, its two satellite regencies of Sidoarjo and Gresik, the city of Malang and neighboring Batu city and Malang regency, despite all of East Java’s 38 cities and regencies having confirmed at least one case each.

“We have recommended that the PSBB should be enforced in the entire province before all the cities and regencies in East Java are declared red zones. The number of PDPs in East Java is very high [...] stretching throughout the province,” said Windhu Purnomo, an epidemiologist at the Airlangga University School of Public Health in Surabaya. He said the PDPs had more than a 60 percent chance of having been infected by the virus.

As the government develops protocols for the “new normal” amid the pandemic, regions planning to relax their large-scale social restrictions (PSBB) must meet the conditions of three indicators.

The first indicator is that transmission of the virus must continuously decline for 14 consecutive days, based on the effective reproduction rate (Rt). The National Development Planning Agency (Bappenas) is currently preparing a dashboard to monitor Rt levels in each province, district and city.

Bappenas head Suharso Monoarfa explained that the second indicator was a measure of the healthcare system. This will be indicated by how healthcare systems respond to the needs of COVID-19 patients. According to Suharso, this indicator requires the number of new cases to be smaller than the existing capacity of healthcare facilities.

Healthcare services provided for COVID-19 patients must only take up 60 percent of the healthcare facility’s total capacity. This means that if a hospital has 100 beds, only a maximum of 60 beds must be allocated for COVID-19 treatment.

“The daily increase of new COVID-19 patients, then, must be below 60, in accordance with healthcare facilities’ capacity. This is what we call a measure of healthcare system capacity and we will use this to decide whether the PSBB can be relaxed or not,” explained Suharso.

The last indicator is surveillance through massive testing. Suharso admitted that Indonesia’s testing capacity remained far lower than that of other countries, as COVID-19 testing in the country had only reached 743 people per 1 million people.

The COVID-19 pandemic, understood to be a health crisis, has also become a hindrance in efforts to strengthen democracy, especially in recent years when Indonesia’s democracy has considerably weakened.

A study by the Varitieties of Democracy (V-Dem) Institute in Sweden, published in April 2020, categorized 48 countries high at risk to worsening democracy, 34 moderate risk countries and 47 countries considered low risk. Indonesia has been included in the moderate risk category.

“When the crisis began, people were worried that the pandemic would not only endanger health but also threaten democracy. This has happened because some countries have acted excessively [in response to the pandemic],” said V-Dem Institute deputy director Anna Luhrmann.

When conducting their study on Indonesia, the V-Dem Institute used Regulation in Lieu of Law (Perppu) No. 1/2020 on the response to the COVID-19 pandemic, which was then ratified as Law No. 2/2020, as a reference. Another reference used was when military officials were appointed persons in charge at the Wisma Atlet COVID-19 hospital in Jakarta.

The study highlighted the dangers of Indonesia’s democracy weakening, as several indexes measuring the quality of democracy have fallen over the years. The V-Dem Institute Electoral Democracy Index between 1998-2019 showed that Indonesia scored highest in 2004, with an index of 0.73, the highest score being 1. However, in 2019, the index dropped to 0.64.

A number of national and foreign academics interviewed by Kompas from May 15 to 21 expressed concern over the weakening democracy in the country. According to Indonesian Center for Political Research head Firman Noor, in every crisis, there is a tendency to strengthen the role and authority of a single ruler, with Indonesia being no exception.

The government has asked the Constitutional Court to reject a petition for a judicial review of Regulation in Lieu of Law (Perppu) No. 1/2020 on the response to the COVID-19 pandemic, arguing that the Perppu has already been passed into law.

Finance Minister Sri Mulyani Indrawati, Law and Human Rights Minister Yasonna Laoly and Attorney General ST Burhanuddin attended a hearing on Wednesday to represent President Joko “Jokowi” Widodo after the Constitutional Court summoned him and a delegation from the House of Representatives last week to give their testimony.

The House Legislation Body (Baleg) did not send a delegation to the hearing.

“The House has given its approval in a plenary session to pass Perppu No. 1/2020 into law,” Sri Mulyani told the bench during the hearing. “The government has ratified the House’s approval through the issuance of Law No. 2/2020.”

With the passing of the Perppu into law, the plaintiffs – consisting of five groups of anticorruption activists, including the Indonesian Anticorruption Community (MAKI) – may have failed in their legal objective as they filed the judicial review against the Perppu specifically.

Kurniawan Adi Nughroho, one of the plaintiffs’ lawyers, demanded the finance minister provide documentation as evidence that the Perppu had been ratified through Law No. 2/2020.

Ahmad Yani, another lawyer for the plaintiffs, argued before the court that the passing of the Perppu was too quick as it had been decided on in only one sitting.

The Perppu was signed by President Jokowi on March 31 and passed by the House into law on May 12.

The remaining high sugar prices in the past few months are not only driven by scarcity of supply but also a deliberate act of rent seekers raking in big profits from sugar trade. Therefore, the government must be firm in its supervision and impose sanctions to big traders that deliberately inflate prices.

Trade Ministry officials conducted an inspection in one sugar plant that processed imported refined sugar in Malang, East Java, on Wednesday. The plant sold the sugar to distributors at higher prices, even higher than the maximum reference selling price of Rp 12,500 per kilogram.

Consumer protection director general Veri Anggriyono said on Thursday that his subordinates were now completing the investigation and would recommend a license revocation to the sugar plant.

The government has tasked members of the Indonesian Refined Sugar Association (AGRI) to process 250,000 tons of refined sugar into sugar for consumption to bring down prices. AGRI then agreed to supply 150,000 tons of sugar to Indonesian Retailers Association (Aprindo) members. However, according to Aprindo chairman Roy Mandey, AGRI could only supply its members with 92,000 tons, as over 50,000 tons had been bought by big distributors.

Indonesian coal miners are struggling with slow demand this year as businesses in India, one of the country’s major coal markets, hit the brakes due to a prolonged lockdown to contain the COVID-19 outbreak, a data firm has said.

The South Asian country’s coal imports, a commodity mostly used for power generation, is projected to decrease by 19.1 percent year-on-year (yoy) to 149 million tons, according to IHS Markit.

The consultancy initially projected Indonesian coal exports at 419 million tons before India announced an extended lockdown and before market conditions worsened in Southeast and East Asia, which are Indonesia’s other major coal export markets.

“India’s lockdown did result in lower sales to India. But Adaro’s market is widespread, so we could divert sales,” said Adaro president director Garibaldi “Boy” Thohir.

Insurance observer Maryono Sumarsono projected that the growth of insurance industry premiums will be minus 10 percent to minus 20 percent this year. However, Maryono said that certain segments of society would continue to pay their life insurance as it was already part of their basic needs. Sekolah Tinggi Manajemen Asuransi Trisakti lecturer Azauarini Diah shared the view, saying that life insurance companies still had the opportunity to obtain premium income in 2020.