Vaccine procurement yet to begin as November deadline approaches 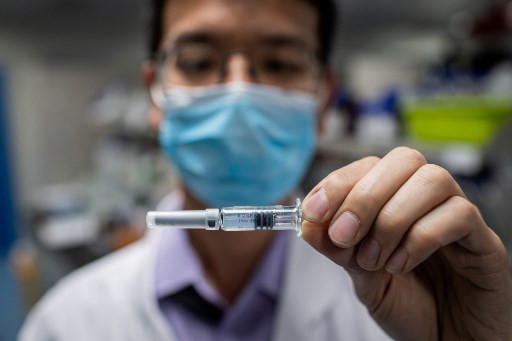 In this picture taken on April 29, 2020, an engineer shows an experimental vaccine for the COVID-19 coronavirus that was tested at the Quality Control Laboratory at the Sinovac Biotech facilities in Beijing. - Sinovac Biotech, which is conducting one of the four clinical trials that have been authorised in China, has claimed great progress in its research and promising results among monkeys.(AFP/Nicolas Asfouri )

The government’s deadline to begin its mass vaccination campaign in November is fast approaching, however the procurement process is still not yet clear. State-owned pharmaceutical company PT Bio Farma said it was awaiting technical instruction regarding the procurement of the potential vaccines developed by Chinese companies Sinovac, Sinopharm and Cansino.

According to Bio Farma’s corporate secretary, Bambang Heriyanto, vaccine procurement is considered a government program, which means it awaits instructions from the government on the technicalities of procurement and funding.

A government source from Tempo claimed that the Health Ministry, which should have been at the forefront of vaccine procurement, seemed to have passed on the responsibility on to Bio Farma. The source said that vaccine procurement could be done both through the government and independently. “If [procurement] is done through the government, the Health Ministry should have stepped in to help,” the source added.

The Health Ministry’s disease prevention and control director general, Achmad Yurianto, said, however, that Bio Farma’s assignment was in accordance to Presidential Regulation (Perpres) No. 99/2020 on vaccine procurement and vaccination to mitigate the COVID-19 pandemic. The regulation states that the ministry is allowed to assign all vaccination procurement matters to Bio Farma.

Thus, Yurianto acknowledged that vaccine procurement still awaited the green light from the Food and Drug Supervisory Agency (BPOM), the Religious Affairs Ministry and the Indonesian Ulema Council (MUI). Representatives of the three institutions are currently in China to check the safety and effectiveness of the vaccine and whether it is halal or not.

Yurianto expects they will receive approval to procure no later than the first week of November.

Jakarta has become the second region in the country to issue a COVID-19-related bylaw after the City Council and the administration agreed to endorse a set of provisions on Monday to penalize stigma-related noncompliance with COVID-19 policies.

The final draft of the bylaw, which was obtained by The Jakarta Post, stipulates new punitive measures, namely a maximum fine of Rp 5 million for people who refuse to take polymerase chain reaction (PCR) tests, refuse to undergo COVID-19 treatment or vaccination, escape from healthcare or isolation facilities or insist on taking the remains of people who have died of a probable or confirmed case of the disease.

People who, in an effort to take the bodies of COVID-19 victims, threaten authorities or disregard protocols will be fined more – a maximum of Rp 7.5 million.

The move comes as the country’s COVID-19 case tally continues to rise. In July, President Joko “Jokowi” Widodo instructed regional administrations to formulate their own COVID-19 response bylaws to provide a legal basis for sanctions and punishments.

Many regions have responded by implementing punitive provisions using legal instruments such as circular letters or gubernatorial regulations. But this has raised public concerns. The 2011 Regional Government Law stipulates that fines can only be established by regional bylaws or higher levels of regulation.

A government-sanctioned joint fact-finding team (TGPF) has reported that it found indications that security forces were involved in the shooting of Papuan pastor Yeremia Zanambani after investigating a series of shootings in Intan Jaya regency, Papua.

The team presented its findings to the Office of the Coordinating Political, Legal and Human Rights Minister on Wednesday, and Coordinating Minister Mahfud MD disclosed several key points from the 14-day investigation.

“Regarding the killing of pastor Yeremia Zanambani on Sept. 19, the information and facts obtained by the team in the field indicate the alleged involvement of elements of security forces, even though there’s also a possibility that a third party was behind [the killing],” Mahfud said during a press conference on Wednesday.

Additionally, the team reported that an armed criminal group was allegedly behind the killings of two military officers and a civilian on Sept. 17.

Mahfud said the government would follow up on the findings and noted that he had instructed the National Police and Attorney General’s Office to pursue the cases in accordance with applicable criminal and state administrative laws.

The team’s findings will also be passed onto the National Police, the Indonesian Military (TNI) and the State Intelligence Agency (BIN) for further investigation, he added.

Corruption Eradication Commission (KPK) chairman Firli Bahuri reiterated that the allocated budget was a social safety net to be used for residents affected by the pandemic.

“In handling COVID-19, local administrations are asked to reallocate their budget for three main things, namely social security nets, health management and cushioning economic impacts. However, it is unfortunate that the amount for each focus has not been regulated,” said Firli on Wednesday.

“From the KPK’s monitoring, these are all regions that will be holding elections. The KPK’s prevention deputy has coordinated with the BPKP [Development Finance Comptroller] as well as the BPIP [Government Internal Supervisory Agency] to help regional administrations revise their budgets. The regional finance director general will also help,” said Firli.

Crackdowns on government critics, as well as pro-government propaganda on the internet, have severely limited online freedom in Indonesia, turning the once-safe refuge for public discourse into a restricted zone for expressing opinions, according to Freedom House's recent study.

The think tank’s Freedom on the Net 2020 report gives Indonesia an overall score of 49 on a scale of 0 to 100, classifying the country's internet freedom rank as “partly free” – a slight dip from last year’s overall rating of 51 and 54 in 2018.

The study noted that the government had taken authoritarian measures to stifle dissent across online platforms during a number of critical events taking place between June 1, 2019 and May 31, 2020.

Among the most drastic of such measures was the government-imposed internet restriction during a series of anti-racism protests in Papua and West Papua in August and September last year, under the pretext of curbing the spread of “misinformation” surrounding the civil unrest.

The internet blackout was later deemed unlawful by the Jakarta State Administrative Court as the policy was considered to be flawed in authority, substance and procedure.

Furthermore, Freedom House also found that state agents had actively cracked down on online discourse considered to have contradicted the values espoused by the government.

Public shares in BRIS to be diluted after merger
Bisnis Indonesia, headline

Bank BRIsyariah (BRIS) will have to increase its post-merger public offering to meet the 7.5 percent minimum free float rule. According to the merger plan, the merger will be done through rights issue with a conversion scheme by BRIS as the surviving entity.

After the merger, Bank Mandiri will become the majority shareholder with a 51.2 percent stake. Bank Negara Indonesia and Bank Rakyat Indonesia will receive 25 and 17.4 percent stakes, respectively. Meanwhile, the public offering will be diluted to 4.4 percent from the previously 18.47 percent.

Economists said there are two possible corporate actions that BRIS could take to maintain its status on the Indonesia Stock Exchange. First, by releasing some of its shares to the public. Second, by issuing new stocks.

BRIS stock prices have increased significantly in the last few months. Over the last three months, the price has increased by 183.54 percent, while for the year-to-date, it has increased by 322.73 percent. Although it fell by 7 percent on Wednesday (10/21) to Rp 1,395, the price is still higher than the Rp 781.29 per stock price as stipulated in the recently released prospectus.

The valuation is going to be used for merging stakeholders’ shares. BRI Syariah (BRIS) will issue around 40.84 billion new stock units to be distributed to Bank Mandiri, BNI, and BRI accordingly.

According to Samuel Sekuritas head of research Suria Dharma, BRIS is not obliged to perform tender offer to public shareholders. Based on the Financial Services Authority Regulation No. 9/POJK.04/2018, changes in ownership due to merger are exempted from the mandatory tender offer.

In the merger plan, BRI will offer to purchase public shares at Rp 781.29 per share following the Rp 7.59 trillion total valuations of BRI Syariah per June 2020.

Shareholders of state-owned Bank Mandiri, the nation's largest lender by assets, named Darmawan Junaidi its new president director during an extraordinary shareholders meeting on Wednesday. Under his control, Bank Mandiri would focus on wholesale banking while finding out an opportunity to develop the business inorganically.

In addition to wholesale banking focus, Darmawan said, the bank will aim to increase the performance of the micro, small, and medium enterprises (MSME) segment.  But he said he would not significantly change the performance targets this year as it is about to end.

Furthermore, Darmawan explained that the bank is in the survival mode due to Covid-19 pandemic despite the bank had enough capital to grow inorganically. Thus, Mandiri will not take any meaningful corporate action while waiting for a better momentum and the Covid-19 ending.

The International Monetary Fund (IMF) has raised concern over environmental protection – or the lack thereof – in the Job Creation Law, calling on the government to ensure sustainable growth.

While the new omnibus law would ease restrictions that had been identified as obstacles to job-creating investment and higher productivity, which could boost growth and reduce poverty, one concern related to environmental standards, said IMF mission chief for Indonesia Thomas Helbling.

“The implementing regulation that is now underway should be guided by the need to ensure sustainable and inclusive growth,” he told The Jakarta Post through email on Wednesday. “It should be applied in a consistent and transparent fashion.”

The omnibus bill, passed into law on Oct. 5, has sparked widespread public protests and labor strikes as it is considered as undermining labor rights and weakening environmental protection.

Businesses considered low-risk will only need to register before they begin operations, according to the new law. Meanwhile, businesses considered medium-risk need to follow a set of standards, and only high-risk investment required an environmental permit.

The Public Works and Housing Ministry has proposed nine new toll road projects to be included on the list of national strategic projects to be completed by 2024, as the nine toll roads are important to drive equitable economic growth in the regions.

Danang said that the nine toll roads all meet the requirements to be included in the list of strategic projects as they have their pre-feasibility studies completed and their value are all above Rp 100 billion.