Vaccine safety and effectiveness must be ensured: Jokowi 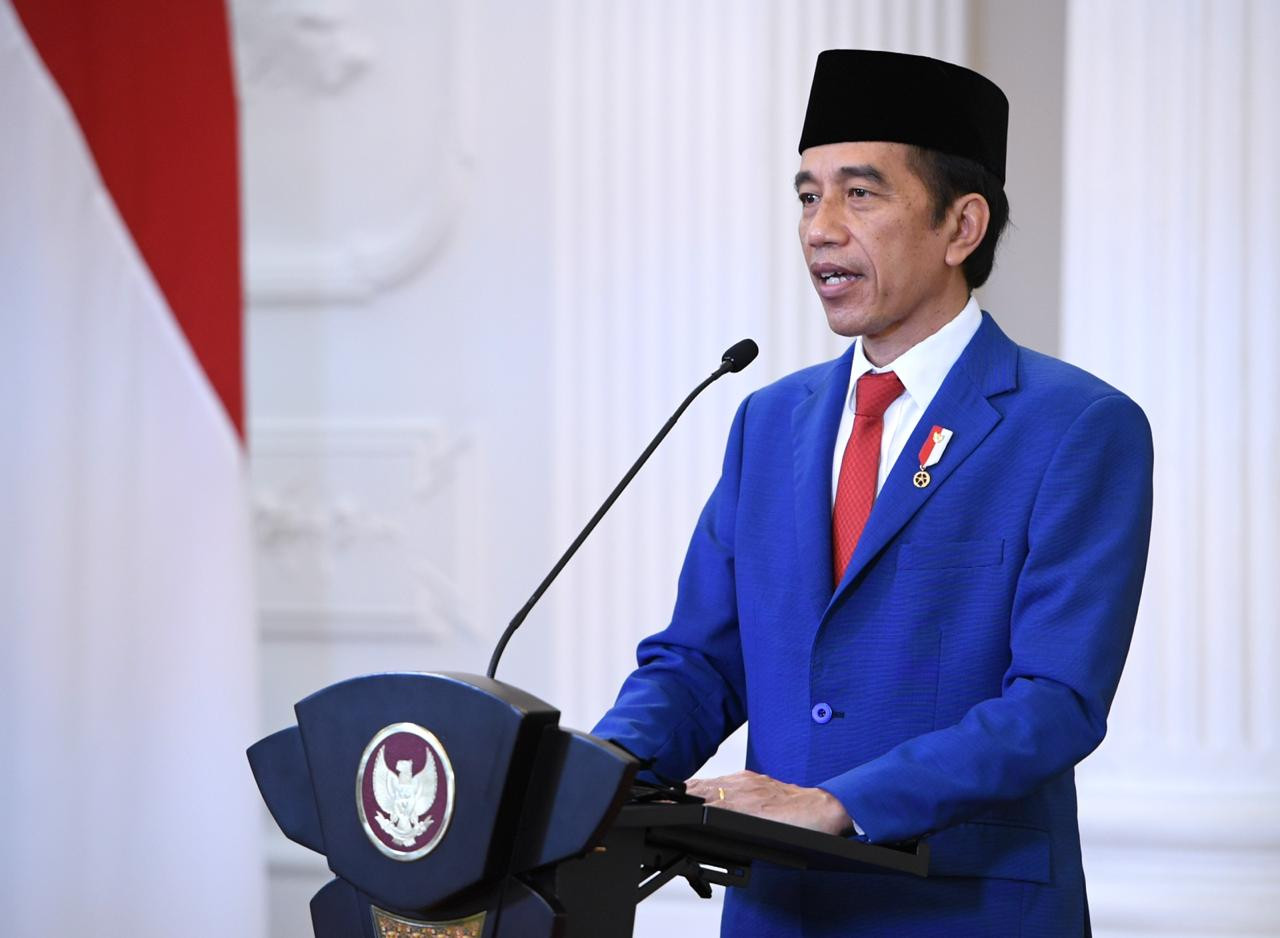 President Joko Widodo delivers his address at the United Nations General Assembly, which was broadcasted virtually on Sept. 22. It was Jokowi's first speech and attendance at the largest annual multilateral summit during his tenure. (Presidential Secretariat Press Bureau/Lukas)

President Joko “Jokowi” Widodo has instructed his Cabinet to ensure the safety and effectiveness of COVID-19 vaccines used in the national vaccination program. The two issues were the top concerns of experts and the public, he said. “Safety means that all vaccines given to people must first go through a series of proper clinical trials,” the president said during a limited Cabinet meeting at Merdeka Palace on Monday.

“Because if not – if there’s even one problem – it will fuel public distrust in the vaccination effort,” he continued.

Each stage of the trials, he said, must be based on scientific processes and data, as well as proper health standards. He warned his Cabinet not to let excessive haste jeopardize the testing process. “Be careful, and don’t rush for a vaccine and overlook health standards,” he said.

Experts said the government was betting on the success of unfinished vaccines to solve the COVID-19 crisis in the country.

Workers united under the Confederation of Indonesian Trade Unions (KSPI) plan to continue staging protests against the controversial Job Creation Law until Nov. 10, longer than what was previously predicted by the government.

KSPI president Said Iqbal said the rallies would take place starting from Nov. 2. Thousands of workers plan to assemble in two locations in the capital city, namely the Presidential Palace compound and the Constitutional Court building in Central Jakarta.

Also on Nov. 2, the KSPI, along with the All-Indonesia Workers Union Confederation (KSPSI) and 32 other worker unions, will file a request for a judicial review challenging the Job Creation Law in court.

Thousands of workers from 24 provinces throughout the archipelago are expected to also stage simultaneous protests on Nov. 2 in their respective regions, including in Greater Jakarta, Serang and Cilegon in Banten, Bandung in West Java and Surabaya in East Java.

The United Development Party (PPP) will soon elect its new chairman during the party’s national congress slated for Dec. 19 to 21 in Makassar, South Sulawesi. So far, only PPP acting chairman Suharso Monoarfa has announced his candidacy.

Following the arrest of then-chairman M. Romahurmuziy for graft, the PPP has plunged into a leadership crisis.

With just two years left in office and a long list of campaign promises to fulfill, Jakarta Governor Anies Baswedan has his work cut out for him, with city councillors and experts pointing to subpar city achievements amid a raging COVID-19 outbreak.

The nascent Indonesian Solidarity Party (PSI), a staunch opposition party to the Anies administration at the Jakarta City Council, said Jakarta under Anies’ leadership had failed to set program priorities and lacked transparency in budget planning and implementation.

Other councillors were aware that the COVID-19 pandemic had derailed many of Jakarta’s development programs, but they said the implementation of some of Anies’ flagship programs — the One District One Entrepreneurship ( OK OCE) and the zerorupiah down-payment housing programs — had been making slow progress long before the health crisis.

Indonesian Democratic Party of Struggle (PDI-P) faction head Gembong Warsono said it was also “impossible to achieve the goal” of building thousands of affordable apartments under the zero-rupiah down-payment housing program by the end of Anies’ tenure.

Indonesia is set to sign a trade agreement with South Korea and seeks ensure that a larger deal at the regional level will also be inked, as the country focuses on increasing overseas market access in the hopes of lifting its economy out of the mire of the pandemic.

Foreign Minister Retno Marsudi recently said she would oversee the signing of the Indonesia-South Korea Comprehensive Economic Partnership Agreement (IK-CEPA) in November, a move that confirms the ministry’s increased focus on economic diplomacy.

Under the agreement, Indonesia's industrial, fisheries and agricultural products will get better access to the South Korean market. In return, Indonesia will buy raw industrial materials from South Korea to facilitate South Korean investment in the country.

The discussion to determine next year’s tobacco excise is still far from reaching a conclusion. The Finance Ministry is planning to set the tobacco excise at 15 to 17 percent following President Joko Widodo’s suggestion for a 13 to 20 percent tobacco excise range.

However, both businesses and ministries alike have been voicing their opposition to the plan. The Industry Ministry hopes that the tobacco excise will not be increased in 2021 following feedback from tobacco farmers, factories and the East Java administration.

Cigarette factories have been under pressure as their production is predicted to drop by 30 to 40 percent in 2020. An increase in tobacco excise might force them and the tobacco farmers into bankruptcy. “If the government increases the tobacco excise, it will only put more pressure on the industry,” said Indonesian Tobacco Farmers Association (APTI) chairman Agus Parmuji.

Economists believe that the government should pay attention to the condition of the industry amid the COVID-19 pandemic before deciding on next year’s rate. The government should also evaluate the effectiveness of its policy formulation to find the balance between health and the economy.

In a historic decision, the Jakarta Corruption Court (Tipikor) has given out life sentences to all of the defendants in the state-owned insurer PT Asuransi Jiwasraya corruption case, including Benny “Bentjok” Tjokrosaputro and Heru Hidayat, who have to pay a combined restitution fee of Rp 16 trillion (US$1.1 billion).

In the sentence, the judge ordered Bentjok and Heru to pay Rp 6.078 trillion and Rp 10.72 trillion in restitution fees respectively. The amount matches the total Rp 16 trillion in state losses as declared by the Supreme Audit Agency (BPK), which means that the two of them will have to bear the total state loss amount. Their assets will be taken away should they fail to pay the restitution fee.

The judge concluded that Bentjok, Heru and other defendants violated the law in managing the state-owned insurance company’s investment. Bentjok had also bought property assets to cover his trace and established a shell company with Heru to receive the corrupted funds.

Despite increases, the government debt is still safe as the major part of debts comes from the government bond, which are mainly owned by domestic players. The government has increased the debt to finance the COVID-19 response and economic stimulus.

Finance Minister Sri Mulyani said that the Indonesian debt-to-GDP ratio had reached 38.5 percent in 2020 and was estimated to increase to over 41.8 percent in 2021. The ratio has escalated from 30.5 percent in 2019. Nevertheless, she made an assurance that the government would manage the debt prudently.

According to the Finance Ministry’s financing and risk management office (DJPPR) data as of September 2020, the government debt reached Rp 5.75 quadrillion, 85 percent of which comes from government bonds totalling Rp 4.89 quadrillion with the rupiah-denominated bond as the majority.

Meanwhile, special advisor to the finance minister Masyita Crystallin explained that the fiscal risk remained safe because the foreign currency debt portion was under control at 29 percent per Aug. 31, and the average maturity time was 8.6 years, which meant the average debt was long term.

Masyita also explained the government strategy to mitigate the fiscal risk, namely buyback, debt switch and loan conversion; in addition, the government also managed the debt properly according to maturity time and focus on issuing bonds for domestic retail investors.

The House of Representatives Commission VII overseeing energy will soon finish deliberation on the authority to set the toll fee for distributing gas through pipes to be included in the Oil and Gas Law revision. “We open the opportunity to improve the toll fee and accelerate investment,” said Energy Commission deputy chairman Eddy Soeparno.

The long discussion over the toll fee started when Energy and Mineral Resources (ESDM) Minister Arifin Tasrif on May 2 wrote a letter to Coordinating Economic Minister Airlangga Hartanto asking for the authority on setting the toll fee to be transferred from the Downstream Oil and Gas Regulatory Agency (BPH Migas) to the ESDM Ministry, subject to the President’s approval. The transfer was facilitated by the job creation omnibus bill, but the corresponding article went missing as the final version kept changing.

Eddy said the Energy Commission would ensure the BPH Migas would continue its role in determining the tariff, but with improvements that will be stipulated in the oil and gas law revision, especially for pipe lanes that have been open for bidding for a long time but have no progress, thus changing their economic value.