Vaccine will not provide instant solutions 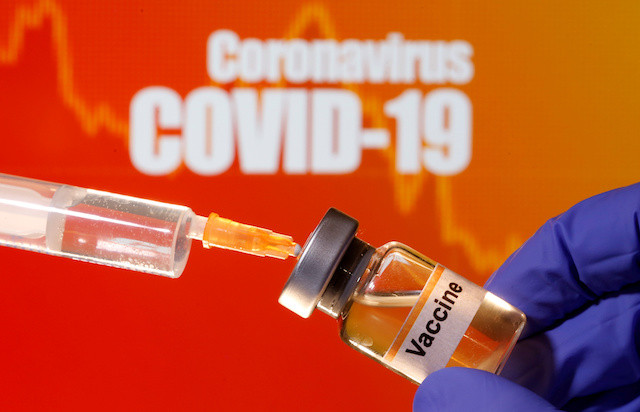 A small bottle labeled with a 'Vaccine' sticker is held near a medical syringe in front of displayed 'Coronavirus COVID-19' words in this illustration taken April 10, 2020(Reuters/Dado Ruvic)

Vaccine will not provide instant solutions
The Jakarta Post, p. 2

The possible development of a vaccine has brought as much hope to Indonesia as it has to any other country battered by the COVID-19 pandemic.

President Joko "Jokowi" Widodo said in late July that he expected the Indonesian economy would be able to recover next year, that a vaccine would be discovered and that mass vaccination would be made available for "all the people in the country".

However, many believe that vaccines should not be seen as the only way out and that trials underway might fail. Even if they do succeed, experts say that the vaccines' efficacy may vary and immunity developed by vaccines may not last forever. It might also take some time to leverage the vaccination drive in Indonesia, the world's largest archipelago with a population of some 271 million people.

"We're working hard on developing the Merah Putih vaccine, but we hope all layers of society won't expect too much – thinking that we already have the vaccines so we can loosen [health protocols] and that all the problems will end with a vaccine," said Amin Soebandrio from the Eijkman Institute for Molecular Biology.

"We want to achieve the so-called true herd immunity, which is developed through vaccination," he said. "Indonesia has a large population. If [we vaccinated] 70 percent [of the population], then we'd have to vaccinate some [189] million people; and we couldn't possibly get to everyone in a week or two."

The number of COVID-19 infections among children has reportedly increased globally. A study suggests that children below the age of five with the illness tend to carry a larger load of SARS-CoV-2, the virus that causes COVID-19, in their respiratory system than older people.

“The latest data shows that more children have been infected by COVID-19. This must be [the government’s] main consideration in its plan to reopen schools, especially since the total number of COVID-19 cases in Indonesia is higher than the global average,” said head of the Indonesian Pediatric Society’s (IDAI) COVID-19 task force, Yogi Prawira.

In Indonesia, the number of deaths caused by COVID-19 among children between the age of 1 and 5 is only 1 percent of the total deaths in the country. Babies below the age of 1 are the most vulnerable. The death rate in this group is about 4 percent.

The COVID-19 death rate among children between the ages of 6 and 18 who catch the disease is 1.1 percent.

Indonesia’ child COVID-19 death rate is higher than other countries. In South Korea, China, Spain and Italy, for instance, there have been no reported COVID-19 deaths among children 9 years old and under.

Epidemiologist Pandu Riono from the University of Indonesia said President Joko “Jokowi” Widodo’s latest policy, which is stipulated in the Presidential Instruction (Inpres) No. 6/2020 on the implementation on health protocols, would not be effective at curbing the spread of COVID-19 in the country.

According to Pandu, the Inpres does not encompass guidelines on including the general public in monitoring the implementation of health protocols. Pandu added that the approach adopted by the government in managing the pandemic had been militaristic so far, as evinced by the involvement of the military in the construction of a quarantine area on Galang Island in March. Military personnel have also been deployed to monitor data collection at the grassroots level.

The government, according to Pandu, should have adopted a public health approach to curb the pandemic and should have relied on public initiative. If the public was not encouraged to take initiative, he said, it would be difficult for people to adapt to the new policies.

The ruling Indonesian Democratic Party of Struggle (PDI-P) is at loggerheads with its political partner in the government coalition, the Golkar Party, following concerns that the omnibus bill on job creation would further expand the powers of the presidency.

In a hearing on the bill with the House of Representatives Legislation Body (Baleg) on Tuesday, PDI-P lawmakers questioned why several articles in the bill transferred authority from “ministries and local administrations” to “the government”.

Arteria went on to question who wrote the bill. “Did they read the 2014 law?” he asked. “Perhaps businesspeople are the ones behind this.”

Golkar lawmaker Firman Subagyo criticized the PDI-P for making “assumptions” by saying that the bill was drafted by the business community.

"It's not right to throw an accusation like that around in a forum like this,” he said. “We should be open to anyone. There is nothing wrong if the private sector provides input into the bill. What is wrong with that?”

The country’s largest Muslim organization, Nahdlatul Ulama (NU), will reportedly rejoin Education and Culture Minister Nadiem Makarim’s Mobilization Organization Program (POP) after the organization exited the program about two weeks ago citing the program’s lack of transparency, among other complaints.

The decision to rejoin the program was taken following the meeting between NU supreme council secretary-general Yahya Cholil Staquf and Nadiem on Thursday. According to Yahya, the decision of the NU central board (PBNU) was based on two clarifications from Nadiem, namely that the POP would not be a grassroots program and that the POP would commence in January 2021.

Previously, Nadiem had apologized to NU, to Muhammadiyah, the second largest Muslim organization in Indonesia, and to the Indonesian Teachers Association (PGRI) following controversies surrounding his program. A day after he made the apology, Nadiem visited Muhammadiyah’s quarter, during which the organization asserted that it still would not take part in Nadiem’s program.

All financially healthy banks to be given access to recovery funds
Kontan, headline

The government has issued Government Regulation (PP) No. 43/2020 to allow for national economic recovery funds to be allocated to all banks in good financial health, not just the 15 biggest banks.

Under previous rules, the government distributed recovery funds to the 15 banks as partner banks, which were then required to distribute the funds directly as loans to their customers or through other banks as implementing banks. Under the new government regulation, all healthy banks are eligible for the funds and, therefore, there are no more implementing banks, only partner banks.

Also, all funds allocated to partner banks have layers of guarantee by multiple institutions. The guarantee premium cost is also going to be paid by the government. It is hoped that having a multilayer guarantee for working capital loans will avoid moral hazards for both banks and debtors, said Finance Ministry director-general of budget financing and risk management Luky Alfirman.

Indonesian Employer Association chairman Haryadi Sukamdani expressed hope banks could be more flexible in determining criteria for debtors to increase the flow of loan distribution to the real sector. Nevertheless, banks still need to be cautious and responsible for distributing funds to avoid non-performing loans.

The tourism sector has been hit the hardest since the beginning of the COVID-19 pandemic. The number of foreign tourists has dropped 81 percent in the second quarter of this year from the first quarter, or 87 percent compared to the same period last year. The number of foreign tourists plummeted as international travel was paralyzed in the second quarter.

Despite that, the government perceives this situation as an opportunity to consolidate and transform the tourism and transportation sectors. For example, the government plans to group all state-owned enterprises in the aviation and tourism sectors under one holding company and reduce the number of international airports by introducing the hub airport concept. It is hoped these strategies will provide a stronger and more efficient foundation for the airline and tourism sectors to rebound.

Tourism businesses remain skeptical about the plan, though, as it is deemed counter-productive to efforts to increase the number of tourists. They suggest that the government shift its focus to technical aspects, such as managing the weekly international flight schedule. In addition, strict and measured implementation of health protocols will be essential to increase confidence in the tourism sector.

Businesses have urged the House of Representatives and the government to speed up the deliberation of the omnibus bill on job creation as the country badly needs it to attract investment, compete with neighboring countries and exit from the Covid-19 crisis.

Indonesian Chamber of Commerce and Industry chairman Rosan P Roeslani explained that businesses have been waiting for the passage of the bill into law. The bill would address the problem of what he calls “regulation obesity” which businesses have to bear. There are now 8,800 regulations in the central government, 14,800 ministerial regulations, and more than 16,000 regional regulations.

“Inconsistency in regulations, low labor productivity, high logistical costs and tax problems have made Indonesia as a high economic cost country,” Rosan said. Therefore, the omnibus bill, when it is passed into law, will provide an opportunity for the government to reorganize, simplify and integrate all regulations so that there will be no overlapping regulations. It will then improve the investment climate.

Investment Coordinating Board (BKPM) head Bahlil Lahadalia explained that with the job creation bill, the government could mitigate the impacts of the COVID-19 crisis and the ensuing unemployment problem.

The government is planning to expand its social aid program and incentives for micro, small and medium enterprises (MSMEs) in an effort to boost consumer spending and revive the sluggish economy in the second half of this year, as fears of a recession loom.

Finance Minister Sri Mulyani Indrawati said on Wednesday the government would reallocate around Rp 70.8 trillion (US$4.85 billion) from existing ineffective stimulus packages to fund the social aid expansion and new incentives so that the government would not need to increase its COVID-19 response budget, already worth Rp 695.2 trillion.

Consumer spending, which accounts for more than half of GDP, fell 5.51 percent yoy in the second quarter, while investment, the second-largest contributor, contracted 8.61 percent.

Sri Mulyani expects the economy to grow at no more than 0.5 percent, or even contract further, in the third quarter, which would mean a recession for Indonesia, while fourth-quarter GDP growth is projected to be near 3 percent, making for a full-year expansion of zero to 1 percent.

Under the plan, the government will allocate Rp 4.6 trillion to increase the amount of rice for the 10 million recipients of the Family Hope Program (PKH) to 15 kilograms per month. It would also disburse Rp 500,000 to 10 million Staple Food Card recipients this month.

The government is preparing aid for workers with salaries lower than Rp 5 million per month and allocating an estimated budget of Rp 31.2 trillion for such aid.

State-Owned Enterprises (SOEs) Minister Erick Thohir, who serves as executive chairperson for the national economic recovery and COVID-19 response team, further explained in a statement on Thursday that the aid for workers would be in the form of direct cash transfers.

The aid would be focused on 13.8 million workers registered on the Workers Social Security Agency (BPJS Ketenagakerjaan) database who are not civil servants or SOEs employees.

Committee for Acceleration of Priority Infrastructure Delivery (KPPIP) project coordinator Yudi Adhi said the government had completed 92 PSN projects out of a total 223 projects since 2014. And now, the government is screening hundreds of new projects to be included in the PSN list.

The requirement to be included in the PSN list are projects with total investment of more than Rp 500 billion and could be completed by 2024. Under the new requirement, the projects must employ people from the surrounding area.